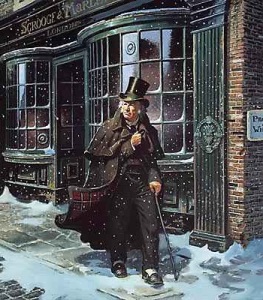 Ebenezer Scrooge strolled briskly down the sidewalk. His cane tapped out a satisfying rhythm with the coins clinking in his pocket. Odd sounding footsteps approached him from behind—more of a webbed toe flap than a step. He knew that sound. He turned to greet his colleague, but didn’t slow his pace.

“Scrooge McDuck! What brings you out this fine morning?”

Scrooge grinned and narrowed his eyes. “Wouldn’t you like to know, laddie?”

Ebenezer allowed Scrooge to catch up and walk alongside him. He studied the duck out of the corner of his eyes. Two wealthy men out for a stroll the morning after that study was released? Hardly a coincidence. “How’s your heart, Scrooge?”

McDuck flapped his wings once and gave a little hop. To a passerby it would look like a well dressed duck ruffling his feathers, but Ebenezer knew he’d startled his fowl friend. He’d guessed correctly and by the scowl on McDuck’s face, McDuck knew it too.

“How’s your own heart, Ebenezer? Still cold as gold in an iceberg?” 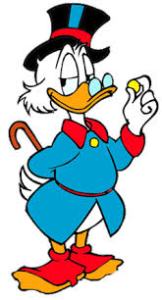 Scrooge pumped his wings and walked faster. “You eat low fat, cholesterol free gruel every day. Your arteries are as clean as a newly minted coin.”

Ebenezer lengthened his strides. “And you chase all over the earth with those three nephews of yours hunting for treasure. You swim in gold doubloons every day. I, on the other hand, sit at my desk all day counting money! This is the first exercise I’ve had in years!”

The two millionaires glared at one another and increased their pace. Sweat glistened on their foreheads and Ebenezer’s top hat tilted to one side.

They were so intent on one another that they didn’t see a young woman roller skating down the sidewalk toward them. McDuck managed to fly up into the air at the last moment, but Ebenezer power walked into her and sent them both sprawling into the grass. Ebenezer pushed himself onto his knees.

“My apologies, Madame! Are you hurt?”

The woman sat up and inspected her elbow where a fresh scrape was oozing red. “Why weren’t you watching where you were going?”

Ebenezer pointed at McDuck who was just landing on the grass beside them. “This scoundrel was trying to save more money than me!”

The woman’s eyebrows reached for the clouds. “Excuse me?”

Scrooge pulled a Band-Aid from a pocket in his vest and handed it to the woman. “The Journal of the American Heart Association just released a study showing that people who exercise save more money on health care each year than people who don’t. This old crank thinks his heart is in worse shape than mine.”

The woman pulled open the Band-Aid. “I don’t understand. What does his heart have to do with it?”

Scrooge’s eyes twinkled like silver in sunlight. “Those scientists saved themselves a kilt-load of cash by building on the work of their predecessors.”

The woman laid the Band-Aid across her scrape and pressed it into place. “And you want your heart to be bad because…”

“And they used less prescription medication and had fewer visits to the hospital,” added Scrooge.

“So if you exercise, you save money. The unhealthier you are when you start exercising, the more money you save,” said the woman. The millionaires nodded. “But the more you exercise, the healthier your heart will be and the less money you’ll save next year.”

Ebenezer scratched his head and frowned.

Scrooge lifted a feathered finger. “You’re forgetting the most important thing, lass. If we exercise, we not only save that 500 dollars every year, but we’ll live longer to enjoy it!”

The woman laughed and skated off down the sidewalk. Scrooge and Ebenezer watched her go.

Scrooge winked up at his friend. “I can borrow them from my nephews.”