Geese keep flying north past my house, so in honor of Mother Goose…yadda yadda yadda, let’s get to the food! 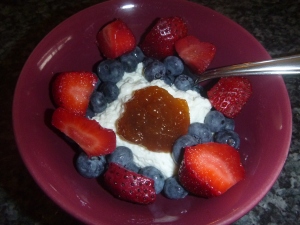 1. The Creamy: 1/3 cup of cottage cheese, a teaspoon of jam, and some berries.  To make cottage cheese, a chemical called rennin is added to milk and the proteins either clump together (curds) or stay liquid (whey).  Since we’re eating our curds and whey, I call it the Little Miss Muffet. 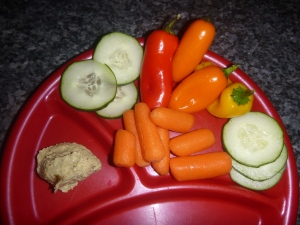 2. The Crunchy: 1 Tablespoon of hummus and a plate full of vegetables.  Disclaimer: to keep the calories to 100, there should only be 10 carrots on the plate, but it sure is prettier this way!  I call it the Jack Sprat.  “Jack Sprat could eat no fat, his wife could eat no lean…” 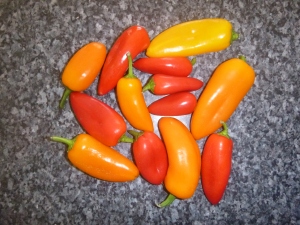 3. The Vegetative: A peck of (non) pickled peppers.  Or about a dozen small sweet peppers if you’re counting.  I call it the Peter Piper. Pick yourself a peck and happy munching!

This is a great video by Quirkology about ways to “trick” yourself into eating less.  It’s also a great excuse to go buy little red plates and decorative mirrors for your kitchen!  It’s science, Honey, I have to go shopping.

Grab a brownie with one hand and a slab of pecan pie with the other…now stuff them in your mouth!  That’s what you pictured in your head, right?   We’re going to keep the joy of eating that you’re imagining, but lose the mess.

Your stomach is the size of your fist…or maybe two fists; depends on who you ask.  Yes, it’s that small, and yes, it can stretch out a LOT! (Do you know how much food I’ve managed to squeeze in there?  I always thought my stomach was the size of a football!)

Your stomach can expand to hold 1.5 quarts (okay, so I wasn’t too far off with the football idea).  One quart = four cups and my fist is about the size of one cup, so I can cram 6 fists into my football, er, stomach.  (Still with me, math majors?)

So what do I do with this information?  Cut a football in half and use it as a plate?  (We can call it the “Foodball”!  What do you think, marketing people?  Weight loss gimmick for men?  Only $19.99 if you call now!)

So, Two Fisted Eating.  At each meal, your goal is to put 4 “fists” on your plate.  TWO fist sized portions of “real food” (as I like to call it) and TWO fists worth of vegetables (remember Veggie Rule #1?).

Let me give you an example; this is the Turkey Curry recipe. 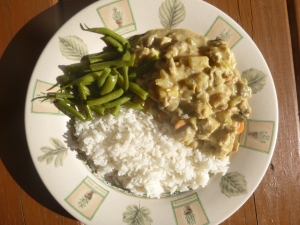 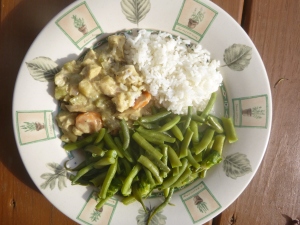 The plate on the left is what my plate looked like a year ago.  Notice that the green section looks more like a decoration – an afterthought – than a part of the meal.  The picture on the right is what I ate for dinner this week.  TWO fists of “real” food (rice and Turkey Curry) and TWO fists of veggies.

Now, THIS IS IMPORTANT: RED ALERT! RED ALERT!  Ready?  When your plate is empty, you stop eating.  It’s that simple and it’s that hard.  Drink some water, drink some tea, start the dishes, lick the plate and cry… whatever works for you, just don’t get seconds (unless it’s vegetable soup, then you can go back for thirds for all I care).

The math majors have all noticed by now that I said our stomachs can fit 6 fists and we only put 4 on our plate.  We have room for two more!  Yes, yes we do.  But just because we can, doesn’t mean we should. (For example, I can post a daily photo of my poodle….)

We’re re-training our brains, not our stomachs.  For years, my brain equated “full” with my stomach being stretched to capacity: 1.5 quarts or 6 fists.  That turned out well for me, didn’t it?  So, now I’m training my brain to say “full” when my stomach has 1 quart or 4 fists in it.  It takes a while for this to happen (like months), but it will happen.  (By the way, a better goal is to stop eating when you feel “not empty” rather than waiting for “full”; still working on that goal.)

Years ago I had my neighbor over for dinner and she said she felt “stuffed” after her second piece of pizza.  Stuffed?  I was doing my best to limit myself to three slices!  I could fit four or five before I felt “stuffed”.  Now I feel “good” full after two slices of pizza and bad “stuffed” if I take a third.  (I normally stop at two.)  Her brain and my brain were trained to say “full” at different stomach capacities.  (And yes, she’s a petite blond bombshell.)

When you look at the food on your plate, especially if it’s less than the amount you’re used to eating, what problem comes to mind?  I’m going to be hungry in two hours! (News flash! I feel hungry two hours later no matter how much or how little I eat!)  Don’t fear the hunger; you know it’s coming, so be ready.  Eat TWO fists of fruits or veggies as a snack.

By the way, I push vegetables rather than fruit simply because fruit has more sugar and therefore more calories.  Fruit is good.  Very very good.  Eat fruit when you crave something sweet, but vegetables are our new best friend.  Is a tomato a fruit or a vegetable?  My definition is this: if you wouldn’t bake it into a pie, it’s a veggie.

So, a meal is TWO fists of regular food and TWO fists of veggies.  A snack is ONE or TWO fists of produce.  Slow down as you eat and enjoy what’s on your plate.  (More on that later.)

Okay, math majors!  When does TWO plus TWO not equal four?

When they add up to negative numbers on the scale! 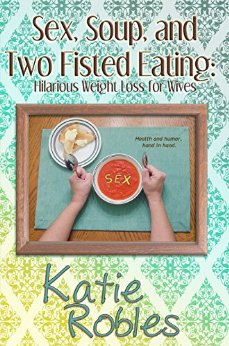 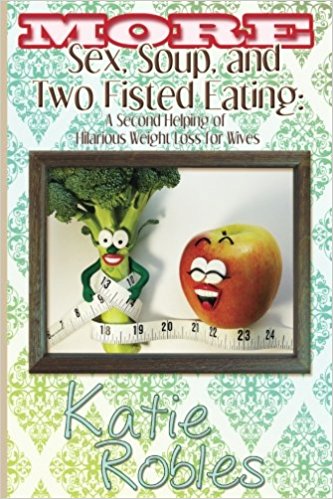 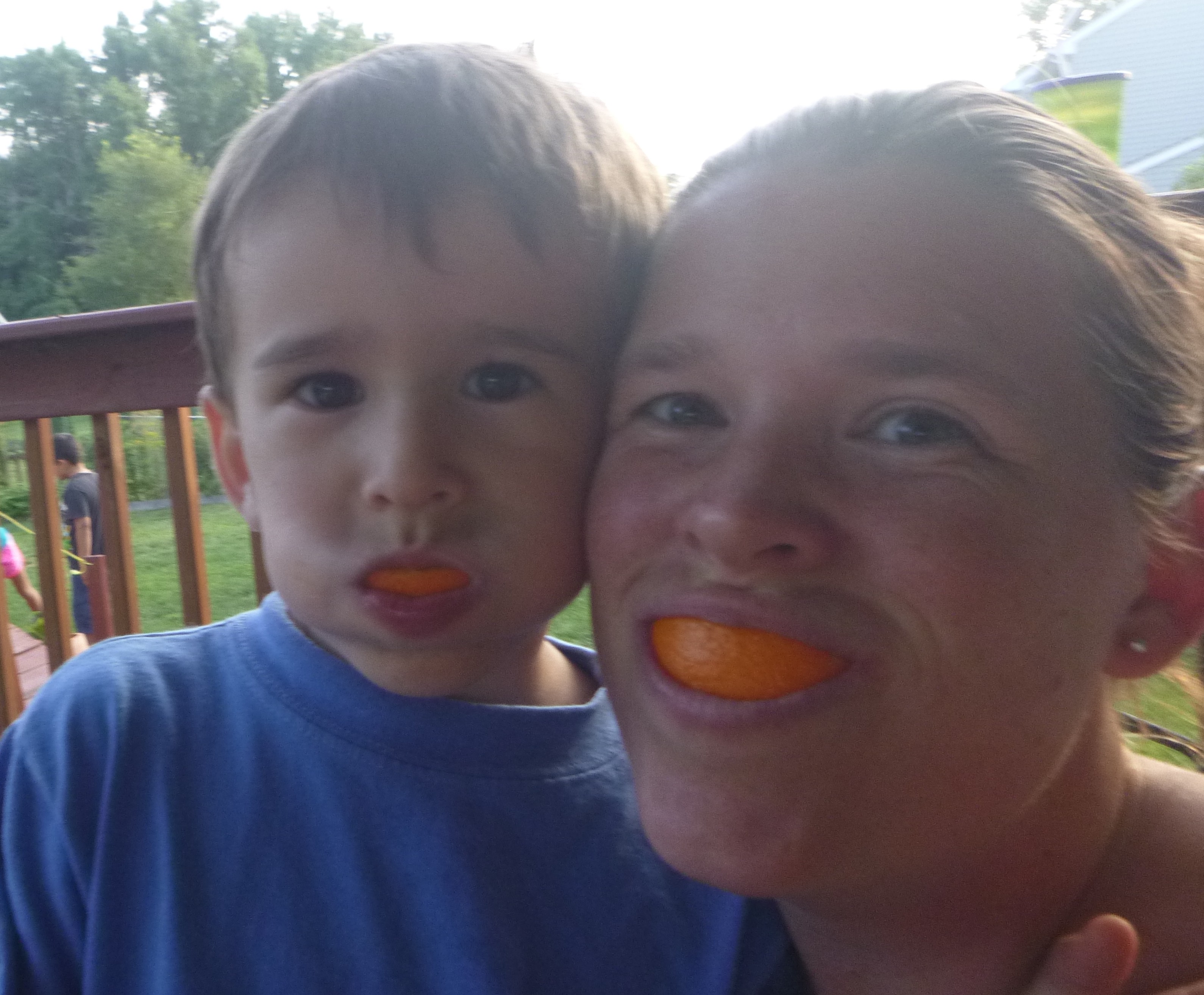