Hi, and welcome to Sesame Skin Street! Skin health is brought to you today by the letters A, C, and E and by the number 3.

Let’s learn the ABCs of eating for skin health. Ready?

A is for Vitamin A which helps the skin cells grow. Making new cells is how your skin repairs itself. Beta carotene converts into Vitamin A, so you should eat orange foods. Carrots are orange. What other foods are orange? Oranges, cantaloupe, sweet potatoes, and winter squash. Good job, you get an A…a Vitamin A+, to be exact! Your parents are so proud.

C is for Vitamin C which helps synthesize collagen. Collagen keeps your skin smooth and taught. Strawberries, oranges, tomatoes, and broccoli are high in vitamin C. C is for Collagen, kids! You get a sticker.

E is for Vitamin E.

3 is for Omega 3. E and 3 work together to boost your immune system, reduce inflammation, and protect your skin from skin damaging, wrinkle causing free radicals. They’re found in similar foods such as nuts, seeds, fish, and olive oil.

Sing a song with me!

Keep skin pretty on your face

Eat these foods after saying grace

Healthy fats are a power base

Keep skin healthy in its place

By eating foods with 3 and ACE

Sesame Skin Street has been brought to you by the letters A, C, and E and the number 3.

And his flesh was restored and became clean like that of a young boy. Then Naaman and all his attendants went back to the man of God. He stood before him and said, “Now I know that there is no God in all the world except in Israel.”

Did you know that healthy weight loss habits like exercise and drinking plenty of water help keep your skin healthy and looking great? Next week we’ll look closer at foods that support skin health, but for today, we’re going to sing a silly song. This is to the tune of “Doe a Deer” from The Sound of Music.

Skin, an organ, the largest organ

Covers you from head to toe!

Skin, with pores, layers, and hair

give it health that you can see.

Skin protects you from disease

and that brings us back to skin!

“I will attach tendons to you and make flesh come upon you and cover you with skin; I will put breath in you, and you will come to life. Then you will know that I am the Lord.” Ezekiel 37:6

Images courtesy of The Wrap (sound of music), musicnotes.com (music) 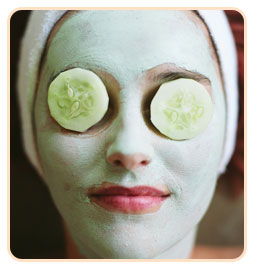 When we think about skin care, most of us picture lotions, sunscreen, or someone sporting a goopy green face peel and cucumber eyelids. Turns out we should add exercise to that list of mental pictures. In 2014 researchers at McMasters University in Ontario found that exercise produced remarkable changes in the skin of people over age 40. (If you’re not over 40 yet, you will be before you know it, so pay attention anyway.)

McMaster University had already studied old mice and found that mice who exercised “maintained healthy brains, hearts, muscles, reproductive organs, and fur far longer than their sedentary labmates”.  Mice who were denied access to running wheels quickly grew frail, ill, gray, and demented. Admit it: not only are you picturing a few humans you know right now, but you’re trying to remember if they exercise.

When we’re young, our body can cover up for many poor health choices. Twenty year olds can eat mostly junk, never leave the couch, and still appear healthy, but as our bodies approach middle age, we start visibly reaping what our habits have sown.

The researchers at McMaster U. turned from mice to human volunteers and biopsied skin from the one area of the body that (hopefully) had never seen the sun: the buttock. The volunteers were habitually sedentary and aged 65 or older at the start of the study, and all had normal skin for their age.

As normal skin ages, the topmost layer of the epidermis (the part you can see and touch) becomes thicker which makes the skin feel dry, flakey, and dense. The dermis, the layer of skin under the epidermis, becomes thinner, which makes the skin look saggy and translucent. That was the state of the volunteer buttocks: thicker outer layer and thinner inner layer. Mm-mmm, green face peels and dry saggy butt skin. If we continue with these mental images, this is going to be a post about weight loss, not skin!

The volunteers exercised twice a week for three months and had a butt biopsy again. (Lucky researchers.) The post-exercise skin layers looked very different; similar to the skin of 20-40 year olds. Wrinkles were not affected by the exercise, but those wrinkles were now enjoying a thinner epidermis and a nice thick dermis.

Why does exercise benefit our skin? One reason is sweat, my least favorite aspect of exercise. When our bodies get warmed up, our pores dilate. As the sweat pours forth, it carries dirt and oil with it, like a warm, salty, inside out mini shower. Speaking of showers, if you won’t be bathing soon after you sweat, it’s a good idea to at least wash your face. If you don’t rinse them off, the dirt and oil can be sucked back into your pores as you cool off. Yup, this is definitely a weight loss post.

Exercise also reduces stress and body wide inflammation, two things the medical community in general agrees we’re better off without. When we’re stressed, our glands produce less oil in our skin which causes things like acne and eczema to flare up.

Next week we’ll look at the biggest benefit of exercise for the skin: blood flow.

Whoever heeds discipline shows the way to life, but whoever ignores correction leads others astray. Proverbs 10:17 (NIV)